R31 Introduction to Corporate Governance and Other ESG Considerations

Cost of capital is the rate of return that the suppliers of capital require as compensation for their contribution of capital. Assume a company decides to build a steel plant and needs money or capital for it. Investors such as bondholders or equity holders will lend this capital to the company. Suppliers of capital will be motivated to part with their money for a certain period of time if the money invested can earn a greater return than it would earn elsewhere. In short, investors will invest if the return (IRR) is greater than the cost of capital.

Riskier projects will have a higher cost of capital.  A company has access to several sources of capital such as issuing equity, debt, or instruments that share characteristics of both debt and equity. Each source becomes a component of the company’s funding and has a specific cost associated with it called the component cost of capital.

Three common sources of capital are common shares, preferred shares, and debt. WACC is the cost of each component of capital in the proportion they are used in the company.

IFT has the following capital structure: 30 percent debt, 10 percent preferred stock, and 60 percent equity. The before-tax cost of debt is 8 percent, cost of preferred stock is 10 percent, and cost of equity is 15 percent. If the marginal tax rate is 40 percent, what is the WACC?

Note: Before-tax cost of debt is given. Do not forget to calculate the after-tax cost.

The relevant cost of capital is 7%. The WACC using weights derived from the current capital structure is the best estimate of the cost of capital for the average risk project of a company.

Notice that in the equation for WACC, we consider taxes only for debt. This is because payments to equity shareholders in the form of dividends are not tax-deductible. On the other hand, interest costs are tax-deductible in some jurisdictions; they pass through the income statement and provide a tax shield. If interest expense is not tax deductible then the tax rate applied is zero and effective marginal cost of debt is equal to cost of debt (rd). Let us see the effect on net income in the example below.

A company pays 10% interest on capital raised. On the left hand side of the table below, you see that the interest is tax deductible. On the right hand side, the interest is not tax deductible. So the tax expense on the LHS is 16, which is 4 less than that on the RHS. The savings on taxes consequently reflect in the net income as well. The actual cost of debt is 6% when it is tax-deductible instead of 10%.

Any company raising capital always has a target capital structure and raises capital in line with this structure. This information is typically internal to a company, and not available to an analyst. In such cases where the information is not available, an analyst should use the market values of debt and equity as a proxy for the target capital structure (instead of using book values).

Let us take a simple scenario where the capital structure consists of only debt and equity. So, the WACC is . In the table below, you can see the book value and market value of debt is the same. But for equity they are different. While computing WACC, you should use the market values for the weights and ignore the book values. So the weight of debt is 0.2 and the weight of equity is 0.8.

Weights should be based on:

In the absence of explicit information about a firm’s target capital structure, one may estimate it using one of the following approaches:

You gather the following information about the capital structure and before-tax component costs for a company. The company’s marginal tax rate is 40 percent. What is the cost of capital?

Use the market value to calculate the weights of each component.

2.3.     Applying the Cost of Capital to Capital Budgeting and Security Valuation

This relationship between investment opportunity schedule (IOS) and marginal cost of capital (MCC) is depicted in the graph below. The following points can be inferred: 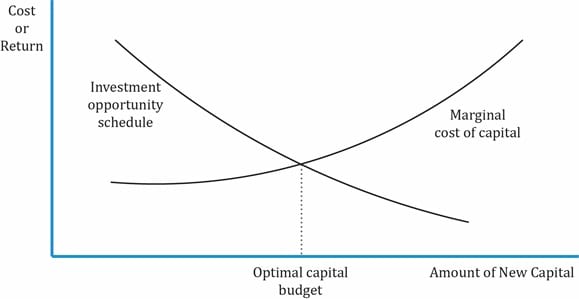 How WACC or MCC is used in capital budgeting:

WACC or MCC is used as the discount rate to compute NPV for average risk projects.

This assumes the target capital structure stays constant and the project has the same risk as that of the company. Adjustments to the cost of capital are necessary when a project differs in risk from the average risk of a firm’s existing projects. The discount rate should be adjusted upwards for higher risk projects and downwards for lower risk projects.

R31 Introduction to Corporate Governance and Other ESG Considerations