2. Pricing and Valuation of Forward Commitments

Pricing versus Valuation of Forward Contracts

Let us take an example. Assume Leo owns a share of GE, whose spot price today (S0) is $100. Rachel enters into a forward contract with Leo today to buy a share of GE at $110 after 1 year.

The terms, parties, and ways to settle the contract are described below:

Interpreting the notation and key features of a forward contract:

Why is the forward price equal to the spot rate compounded at the risk-free rate over the contract period?

Value of a forward contract at initiation

Value of a forward contract at initiation = 0

The value of a forward contract at initiation is zero because neither party pays any money to the other. There is no value to either party.

As market conditions change, only the value of a forward contract changes. Its price does not change as it is fixed at contract initiation.

Thus, the passage of time and spot price changes causes the MTM value of a forward contract to fluctuate representing a gain or loss to contract participants. Exhibit 5 from the curriculum shows this relationship, assuming a constant risk-free rate over the life of a contract for long and short forward contract positions. 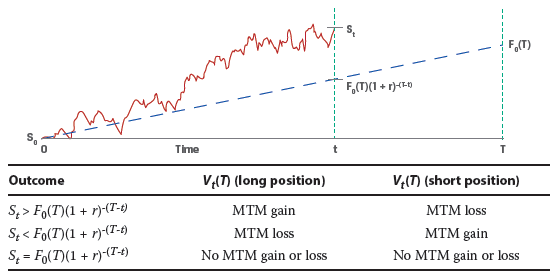 Pricing and Valuation of Forward Contracts with Additional Costs or Benefits

Value of the forward contract

At any time t over the life of the contract, the MTM value of the forward contract, Vt(T), will depend on the difference between the current spot price adjusted for any remaining costs or benefits from time t through maturity.
Vt (T)=(St – PVt (I)+PVt (C))-(F0 (T))/(1+r)(T-t)

(This is based on Example 4 from the curriculum.)

A company agrees to deliver 1,000 Unilever (UL) shares to a financial intermediary in six months under a forward contract at a price of EUR 50.6311 per share. Unilever pays a quarterly dividend of EUR 0.30 three months after contract inception and at time T, and the risk-free rate (r) is 5%. Calculate the forward contract breakeven price, St, where Vt(T) = MTM = 0 four months after contract inception if the risk-free rate, r, remains unchanged at 5%.

Calculate the present value of the dividend per share, PVt(I), given that the second dividend will be paid in two months: 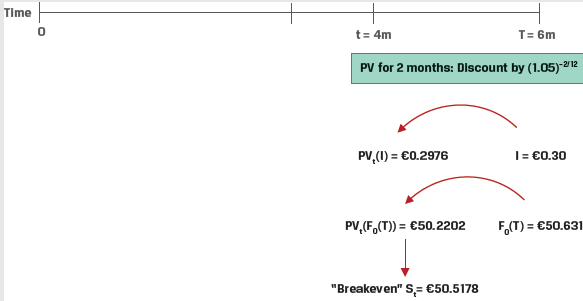 The forward price for a FX forward contract is calculated as:
F0 (T)=S0 e((r_f-r_d)T)
At any given time t, the MTM value of the FX forward is the difference between the current spot FX price (St) and the present value of the forward price discounted by the current difference in risk-free rates (rf − rd) for the remaining period through maturity,
Vt (T) = St– (F0 (T))/e((r_f-r_d)(T-t))

(This is based on Example 5 from the curriculum.)

Describe the MTM impact on the FX forward contract from the company’s perspective if the one-year USD risk-free rate instantaneously rises by 0.25% once the contract is initiated, with other details unchanged.

The YTM is the discount rate that, when applied to a bond’s promised cash flows, equates those cash flows to the bond’s market price.

Using this information we can calculate the YTM for each bond as follows:

A zero rate (also called spot rate) is the YTM on zero-coupon bonds. They are denoted as (z1, z2, ….zN), where zi is the zero rate for period i.

Zero rates can be computed from the YTM of coupon paying government bonds through a process called ‘bootstrapping’.

Continuing with our example, lets add a YTM column to our data on the 3 coupon paying government bonds.

Starting with the one-year bond, which consists of a single cash flow at maturity, we can solve for the one-year zero rate (z1) as follows:

Instructor’s Note: Since the 1-year bond consists of a single cash flow at maturity, the zero rate and the YTM are identical.

Since all cash flows at time t = 1 are discounted at z1, we can substitute z1 into the two-year fixed-coupon bond calculation to solve for the zero-coupon rate at the end of the second period (z2):

We then substitute both z1 and z2 into the three-year bond equation to solve for the zero-coupon cash flow at the end of year three (z3):

The price or present value of a risk-free single-unit payment (e.g., $1, €1, or £1) after N periods is called the discount factor, denoted by DFN.

Discount factors can be calculated from zero rates using the formula:

Continuing with our example, the discount factors for years 1,2, and 3 can be computed as:

A discount factor can also be interpreted as the price of a zero-coupon bond.

Over a two-year period an investor faces the following investment choices:

Based on the no-arbitrage principal both options should give the same results. Therefore,

This is illustrated in the figure below. 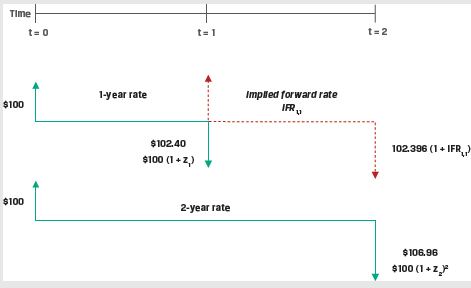 A general formula for the relationship between two spot rates (zA, zB) and the implied forward rate (IFRA,B–A):

Using this formula, we can solve for the one-period rate in two periods (IFR2,1) as follows:

A forward rate agreement (FRA) is an OTC derivatives contract in which counterparties agree to apply a specific interest rate to a future period. FRAs allow us to lock in a rate today for a loan in the future and act as a hedge against interest rate risk.

Exhibit 9 from the curriculum shows the FRA mechanics at t = 0 and settlement at time A. 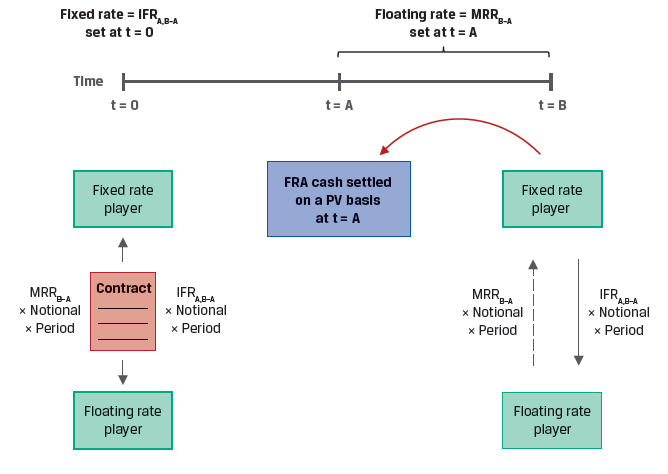 The payoffs on an FRA are determined by market interest rates at expiration:

(This is Example 5 from Knowledge check)

A counterparty agrees to be the FRA fixed-rate receiver on a one-month AUD MRR in three months’ time based on a AUD150,000,000 notional amount. If IFR3m,1m at contract inception is 0.50% and one-month AUD MRR sets at 0.35% for settlement of the contract, calculate the settlement amount and interpret the results.

A short FRA position, or fixed-rate receiver, agrees to pay interest based on a market reference rate determined at settlement and receives interest based on a pre-agreed fixed rate, the implied forward rate (IFR3m,1m). Since AUD MRRB-A at settlement is below the pre-agreed fixed rate, the FRA fixed-rate receiver realizes a gain and receives a net payment based on the following calculation:

Solve for the present value of settlement given the contract is settled at the beginning of the period, using MRRB-A as the discount rate: