The four instruments in a put-call parity are as follows:

Note: The strike price, X, of the options is the same as the par value of the bond.

A protective put is to buy the underlying and buy a put option on it. The cost of this strategy is:

A protective put is like buying insurance for an asset you own, specifically a stock, to protect against a downside. For instance, you own 1,000 shares of Apple, the market is highly volatile and you are worried about a huge decline in the near term. To limit the downside risk, you can buy a put option on the stock by paying a premium. This is called a protective put.

A fiduciary call is a long call plus a risk-free bond. The cost of this strategy is:

The diagram below shows the payoff for a fiduciary call:

Therefore, according to put-call parity:

If, at time 0, the fiduciary call is not priced the same as the protective put, then there is an arbitrage opportunity.

(This is based on Example 1 from the curriculum.)

A stock currently trades at INR295 per share. An investor is considering the purchase of a six-month put on this stock at an exercise price of INR265. A six-month call option with the same exercise price trades in the market at INR59. What should the investor expect to pay for the put if the relevant risk-free rate is 4%?

According to put call parity:

The investor should expect to pay a six-month put option premium of p0 = INR23.85

3. Option Strategies Based on Put–Call Parity

The put-call parity relationship can be rearranged in the following ways:

These equations allow us to replicate an instrument by using the other three instruments. For example, a put option can be replicated by a combination of a long call, a long risk-free bond and a short position in the underlying.

We can also compare the price of an actual instrument to its synthetic version. If the two prices are different, we can generate riskless profits by exploiting the mispricing.

In earlier readings we saw that:

We will use this relationship to come up with the put-call forward parity.

If we substitute the ‘asset’ part in a protective put with a forward and risk-free bond we get:

Here, the risk-free bond has a par value equal to the forward price of F0 (T).

The cost this synthetic protective put is:

The cost of entering a forward contract at t=0 is zero as it requires no upfront payment.

The put option premium at t=0 is p0

The put-call parity relationship can now be written as:

The table below shows that the payoffs for fiduciary call is equal to synthetic protective put when call and put expire in the money.

The put-call parity relationship can also be used to model the value of a firm to equity and debt holders.

Assume that at time t = 0, a firm with a market value of V0 has access to borrowed capital in the form of zero-coupon debt with a face value of D. The value of equity at t = 0 is E0.

The firm value can be expressed as:

When the debt matures at T, there are two possible outcomes:

These payoff profiles can be expressed in terms of options:

Or we can also say that shareholders have purchased a call option on the firm’s assets with an exercise price of D.

Exhibit 9 from the curriculum shows the payoff profiles for shareholders and debtholders. 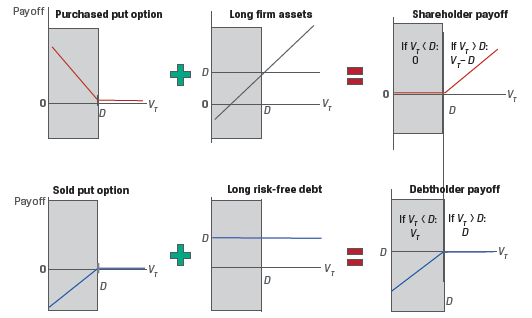