Historical data shows that higher returns were earned in the past by assets with higher risk. Of the three major asset classes in the U.S., namely stocks, bonds, and T-bills, it has been observed that stocks had the highest risk and return followed by bonds, and T-bills had the lowest return and lowest risk.

In evaluating investments using mean and variance, we make the following two assumptions:

9.1 The Concept of Risk Aversion

Risk tolerance is the amount of risk an investor is willing to take for an investment. High risk aversion is the same as low risk tolerance. Three types of risk profiles are outlined below:

The utility of an investment can be calculated as:

A = measure of risk aversion (the marginal benefit expected by the investor in return for taking additional risk. A is higher for risk-averse individuals.

𝜎2 = variance of the investment

While using this formula, use only decimal values for all parameters.

An investor with A = 2 owns a risk-free asset returning 5%. What is his utility?

Now, he is considering an asset with 𝜎 = 10%. At what level of return will he have the same utility?

Given a choice between a risk-free asset and stock with an expected return of 10% and 𝜎 = 20%, what will he prefer?

To understand the indifference curve, let us plot all these numbers – expected return, standard deviation, and utility – on a graph. 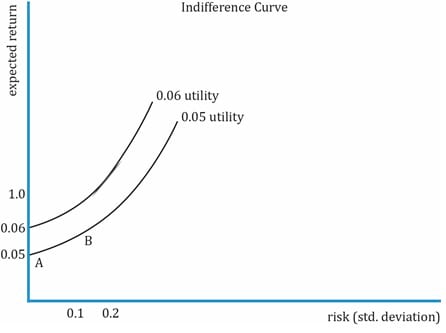 The key points to note are:

We now consider the indifference curves for different types of investors. 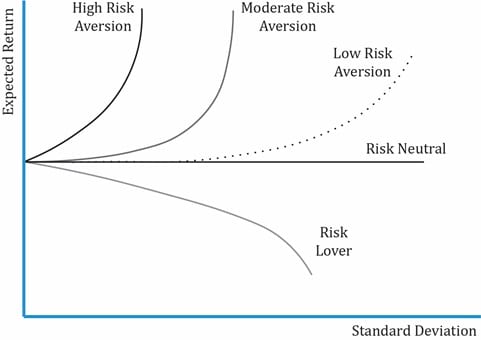 The exhibit above shows the indifference curves for different types of investors with expected return on y-axis and standard deviation on x-axis. Note the following:

Now that we have seen utility theory and indifference curves for various investors, let us see how to apply it in portfolio selection. The simplest case is when a portfolio comprises two assets: a risk-free asset and a risky asset. For a high-risk averse investor, the choice is easy, to invest 100% in the risk-free asset but at the cost of lower returns. Similarly, for a risk-lover it would be to invest 100% in the risky asset. But is it the optimal allocation of assets, or can there be a trade-off?

A portfolio’s standard deviation is calculated as:

become zero as the correlation between a risk-free asset with risky asset is zero.

So, the equation becomes ?p = w2 * ?2. For different weights of the risky asset, let’s calculate the values for risk and return and plot portfolio risk-return on a graph. Note that the expected return is a weighted average of the two assets. 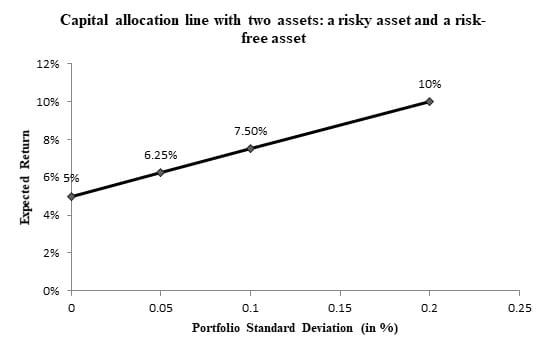 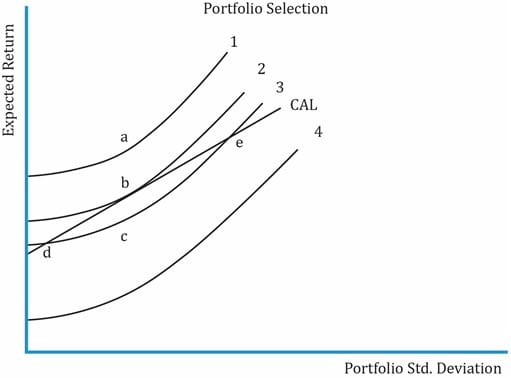 Some key points about the graph:

If another investor has a higher level of risk aversion, where will his optimal portfolio lie? With a higher risk aversion level, the indifference curves will be steeper. The tangential point will be closer to the risk-free asset, so it will be to the south-west of point b.

IFT BLACK FRIDAY SALE is Now Live! Get up to 25% off! Sale ends 28-Nov
Code: BF-22-25
This is default text for notification bar
Learn more