Technical analysis has long been used by traders and analysts, but has only recently received acceptance from regulators and the academic community. Although certain aspects of technical analysis, such as the calculation of indicators, have specific rules, the interpretation of findings is often subjective.

Technical analysis is a form of security analysis that uses price and volume data in decision making. The data is often graphically displayed.

Technical analysis is based on the following logic:

Another principle of technical analysis is that the market reflects the collective knowledge and sentiment of many participants such as investors, hedgers, insiders, and other stakeholders. Market participants, who buy and sell securities, have an impact on price. The greater the volume of a participant’s trades, the more impact the participant will have on price.

Some financial instruments have an associated income stream that adds to the security’s intrinsic value such as coupon payments for bonds and dividends for equity shares. A fundamental analyst can use these cash flows to arrive at a present value of the security. However, for other assets such as commodities, which do not have underlying income streams or financial statements, technical analysis is commonly used.

Technical and fundamental analyses approach the market in different ways, but are both useful. Key differences between the two are listed below:

Drawbacks of technical analysis are:

The various types of charts used in technical analysis are:

Line charts are a simple graphic display of price trends over time. Usually, the chart is a plot of data points, such as share price, with a line connecting these points. The vertical axis (y axis) represents price level and the horizontal axis (x axis) is time. An example of a line chart is shown below. The line chart shows that the price of the stock during the first upward movement of the price is higher than the second high. 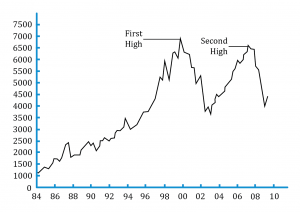 A line chart has only one data point per time interval. A bar chart, in contrast, has four bits of data in each entry – the opening and closing prices, and the high and low prices during the period.

A short bar indicates little price movement while a long bar indicates a wide divergence between the high and the low for the day. An example of a bar chart is shown in the figure below: 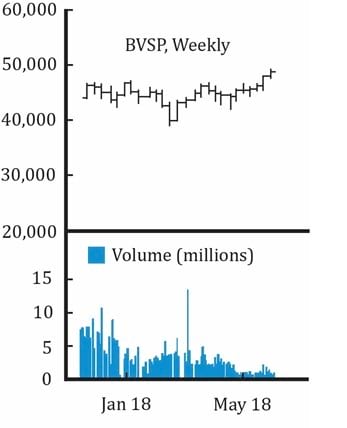 A candlestick chart also provides four prices per data entry point: the opening and closing prices, and the high and low prices during the period. 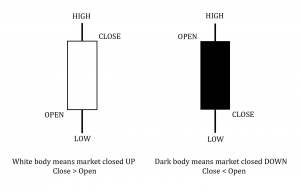 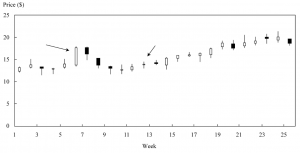 An advantage of the candlestick chart over the bar chart is that price moves are much more visible, which allows for faster analysis. 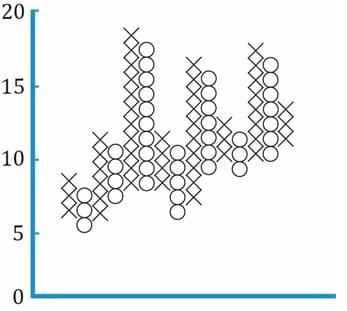 The following steps need to be followed in order to construct a point and figure chart:

Point and figure charts are particularly useful for making trading decisions because they clearly illustrate price levels that may signal the end of a decline or advance.

The vertical axis can be constructed with either:

The horizontal axis usually shows the passage of time. The appropriate time interval depends on the nature of the underlying data. We can have 5-min, 30-min, 1-hour, daily, weekly or even monthly charts.

They are often displayed below a line, bar or candlestick chart. The number of units of the security traded is plotted on the Y-axis and time on the X-axis.

Trend analysis is based on the observation that market participants tend to act in herds and that trends tend to stay in place for some time.

A security is said to be in an uptrend if prices are reaching higher highs and higher lows. An upward trendline can be drawn by connecting the increasing low points with a straight line. An uptrend indicates that the demand is more than supply.

A security is said to be in a downtrend if prices are reaching lower highs and lower lows. A downward trendline can be drawn by connecting the decreasing high points with a straight line. A downtrend indicates that the supply is more than demand. 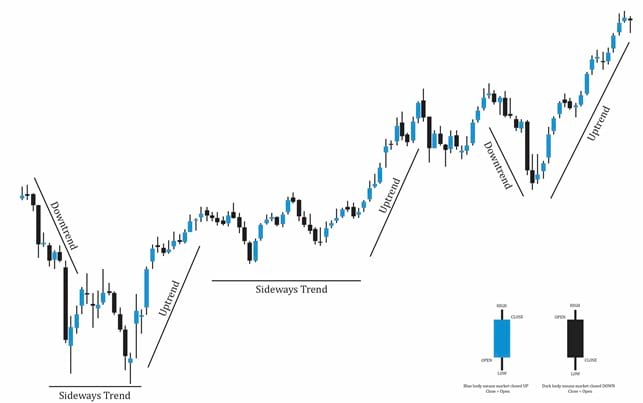 It is the price level at which there is sufficient buying pressure to stop a further decline in prices.

It is the price level at which there is sufficient selling pressure to stop a further increase in prices.

They signal the end of a trend. The four kinds of reversal patterns are:

It consists of the left shoulder, the head, and the right shoulder. This pattern indicates the end of an uptrend. You can profit by going short on the security, the price target is: 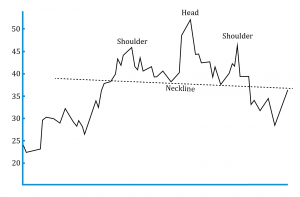 It is a mirror image of the head and shoulders pattern. This pattern indicates the end of a downtrend. You can profit by going long on the security, the price target is: 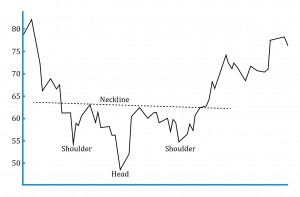 In an inverted head and shoulders pattern, if the neckline is at €125, the shoulders at €80, and the head at €95, the price target is closest to which of the following?

A double top is formed when prices hit the same resistance level twice and fall down. It indicates the end of an uptrend.

A double bottom is formed when prices bounce back from the same support level twice. It indicates the end of a down-trend. 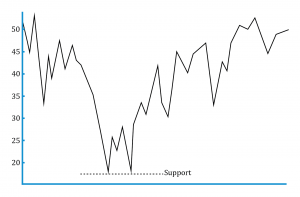 Triple bottoms are formed when prices bounce back from the same support level thrice. 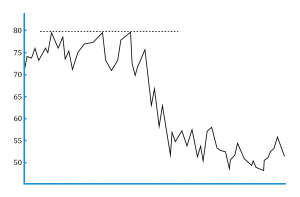 They signal a temporary pause in the trend, and that the trend will continue in the same direction as before. The four kinds of continuation patterns are: 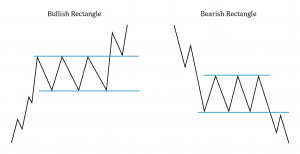 They are similar to a rectangle and are formed by two parallel trendlines. However, they form over a much shorter time interval.

They are similar to a triangle and are formed by two converging trend lines. However, they form over a much shorter time interval.