LM05 The Behavioral Biases of Individuals

They incorporate the information contained in the current and past market prices. The common types are: 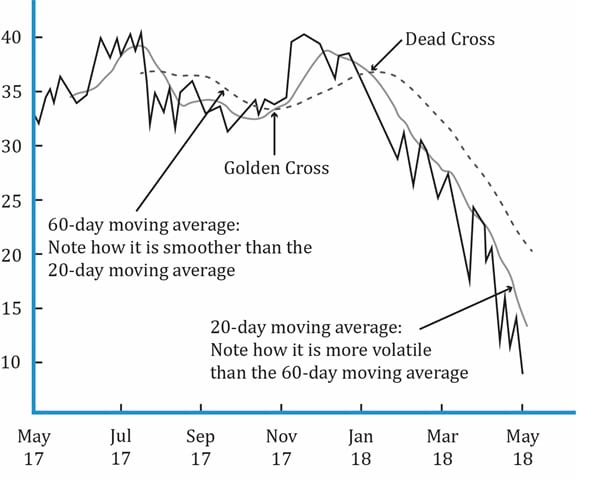 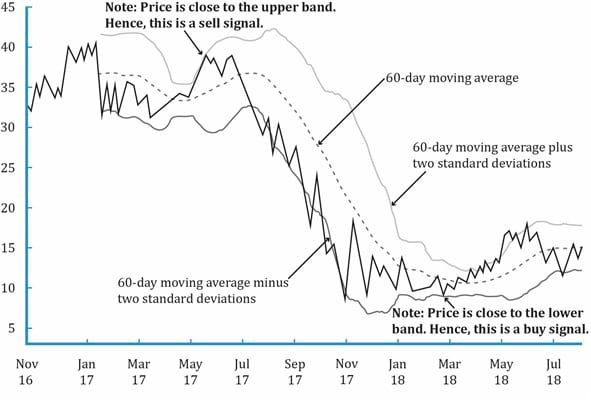 This indicator is generally used to identify a ‘squeeze’ – when volatility falls to very low levels and prices are expected to break out.

It is difficult to identify unusual changes in price movements with price-based indicators. Momentum oscillators help overcome this problem. They are based on rate of change in price data, but are scaled to make them ‘oscillate’ around a value, such as ‘0’, or between two values, such as ‘0’ and ‘100’. Extremely high and extremely low oscillator values indicate overbought or oversold market conditions.

Three main uses of oscillators are:

The commonly used momentum oscillators are:

The rate of change (ROC) oscillator is calculated as:

Sometimes, the ROC oscillator is set to oscillate around 100 instead of 0, by calculating it as: 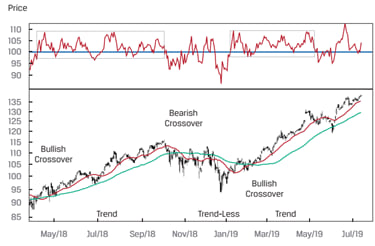 The value of the RSI is always between 0 and 100. A value above 70 represents an overbought situation while a value below 30 suggests that an asset is oversold.

The figure below shows a sample chart with RSI. 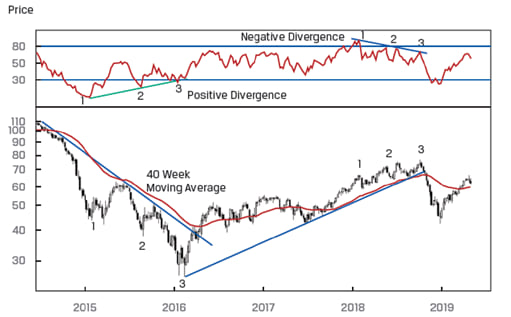 A positive divergence occurs when the security price reaches a new low but the RSI reaches a higher low. This scenario indicates that while the price is reaching a new low, the inner momentum is improving; in other words, the selling pressure is decreasing.

A negative divergence occurs when the security price reaches a new high but the RSI fails to reach a new high. This scenario indicates that while the price is reaching a new high, the inner momentum is fading; in other words, buying pressure is decreasing.

It is based on the observation that in uptrends, prices tend to close at or near the high end of their recent range. Similarly, in downtrends, they tend to close near the low end. It is composed of two lines, called %K and %D that are calculated as follows:

The stochastic oscillator has a default setting of 14-days.

Stochastic oscillator should be used with other technical tools such as trend analysis, pattern analysis and RSI analysis.  If multiple tools give us the same signal, then we can consider it to be a strong signal.

A sample chart with a stochastic oscillator is shown below. 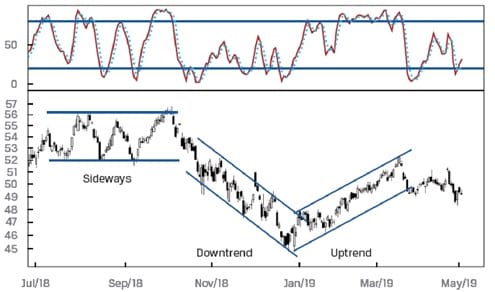 It is the difference between a short-term and a long-term moving average of the security’s price. It is composed of two lines – MACD line and signal line.

The indicator oscillates around 0 and has no upper or lower limit. 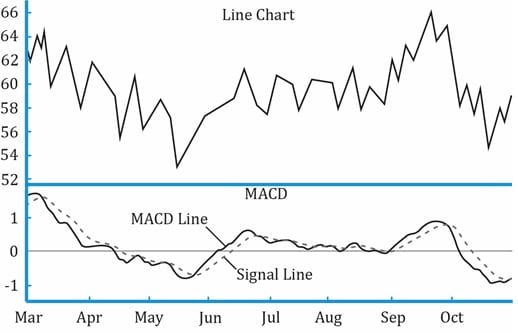 MACD is used in technical analysis in three ways.

The most known use of momentum oscillators is to indicate the overbought or oversold position of a security. Thus, they help in providing signal for buying or selling security but do not help to set the target price.

They gauge investor activity for signs of bullishness or bearishness. The two types

of sentiment indicators are investor polls and calculated statistical indexes:

Calculated statistical indices: They are calculated from market data, such as security prices. The common types are:

VIX is generally interpreted from a contrarian perspective and used with other trend, pattern, and oscillator tools. When other tools indicate an oversold condition and the VIX is at an extreme high, this combination is considered bullish.

LM05 The Behavioral Biases of Individuals