R42 An Introduction to Asset-Backed Securities

This reading covers the basic principles of credit analysis, explores the relationship between the credit risk and capital structure of the firm, the role of credit rating in debt markets, and the impact of credit spreads on risk and return.

Credit risk is the risk that the borrower will fail to make principal and/or interest payments on time. Credit risk has two components:

We combine both the components into a single term called the expected loss.

Loss severity is expressed either as a monetary amount or as a percentage of the principal. Expressing it as a percentage is more useful as it is independent of the invested amount.

The recovery rate is the percentage of principal amount recovered in the event of a default.

Assume a company has a total capital of $100 million of which bank debt is $5 million, bonds are $35 million, preferred shares are worth $10 million, and common equity accounts for $50 million. This is a simple capital structure. You may also have complicated capital structures with a holding company with multiple subsidiaries underneath it across geographies issuing their own debt with different seniority ranking.

A single borrower may issue debt with different maturity dates and coupons. These various bond issues may also have different seniority rankings. Seniority ranking determines who gets paid first, or who has the first claim on the cash flows of the issuer, in the event of default/bankruptcy/restructuring. Bondholders are broadly classified into secured and unsecured.

The exhibit below shows seniority ranking. 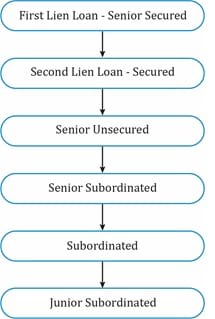 Within each category of debt, there are types and sub-rankings. Let us look at each of the items in detail now (in the order of priority for repayment):

Secured debt: Highest ranked debt in which some asset is pledged as collateral.

Unsecured debt (in the order of ranking): Loss severity can be as high as 100%. Lowest priority of claims. No asset is pledged as collateral. The types are:

Companies issue debt with different ranking for the following reasons:

Recovery rate is the percentage of the principal amount recovered in the event of default. Key points related to recovery rates are given below:

4.  Rating Agencies, Credit Ratings, and Their Role in Debt Markets

Moody’s, S&P, and Fitch are the three main rating agencies. At least two of these agencies assign a rating to the majority of the bonds. The credibility/dominance of the rating agencies is because of:

Be familiar with what the ratings are (Aaa represents the highest quality among investment grade securities, etc.). The rating system is almost similar across agencies starting from A for investment grade to C/D for junk.

Notching: A rating methodology to distinguish rating between different liabilities (bond issues) of an issuer. The objective is that two securities with the same rating should have the same expected loss rate (probability of default * expected severity loss). Credit rating on issues can be moved up or down by a notch based on the risk of default/severity loss.

Rating agencies have started incorporating ESG factors into their ratings of firms. For example, MSCI Inc has launched a set of ratings that aim to measure a company’s attitudes, practices, and advances related to ESG. They identify and track leaders and laggards in the space. Companies are assessed according to their exposure to ESG risks and how well they manage those risks as compared to their peers. The leaders receive a higher rating such as AAA or AA, while the laggards receive a lower rating such as B or CCC.

4.4 Risks in Relying on Agency Ratings

There is sufficient evidence that rating agencies, in general, have done a good job of assigning ratings that reflect the risks involved. Investors rely on these ratings to assess the credit risk of their investments. However, these ratings are not foolproof and have their own limitations:

In many ways, credit analysis may look similar to equity analysis, but there are some important differences:

The four Cs of credit analysis framework are:

We will now look at each of the four Cs in detail.

Capacity is the ability of a borrower to generate enough cash flows to service its debt. To determine an issuer’s capacity in credit analysis, you can draw a parallel to the top-down analysis in equity analysis. The steps involved are:

The next step is to assess the industry’s fundamentals. What are its growth prospects? Does it get affected by macroeconomic factors? Etc.

The capacity to pay is influenced by company fundamentals. Some of the key points in this regard are given below:

Analysts must consider the following factors while evaluating a company’s fundamentals:

The objective of collateral analysis is to assess the value of the assets relative to the amount of debt issued by a company. Credit analysts consider the collateral value if the probability of default is too high.

Methods used by analysts to determine the quality and value of a company’s assets are discussed below:

Collateral value is insignificant for companies with primarily human and intellectual capital (e.g., software and investment management firms) as they do not have hard assets.

This was discussed in detail in the introductory Fixed-Income Securities reading.

Covenants are clauses that state what an issuer can and cannot do. Bond covenants are legally enforceable rules that borrowers and lenders agree on at the time of a new bond issue. They are described in the bond prospectus. There are two types of covenants: affirmative (positive) or negative (restrictive).

Nowadays, most companies are publicly owned, instead of by individuals. Judging the character of a management is different than it would be for an owner-managed firm.

R42 An Introduction to Asset-Backed Securities