A ‘population’ is defined as all members of a specified group. A ‘parameter’ describes the characteristics of a population.

A ‘sample’ is a subset drawn from a population. A ‘sample statistic’ describes the characteristic of a sample.

For example, all stocks listed on a country’s exchange refers to a population. If 30 stocks are selected from the listed stocks, then this refers to a sample.

Measures of central tendency specify where data are centered.

Measures of location include not only measures of central tendency but other measures that explain the location or distribution of data.

The arithmetic mean is the sum of the observations divided by the number of observations. It is the most frequently used measure of the middle or center of data.

The sample mean is the arithmetic mean calculated for a sample. It is expressed as:

where: n is the number of observations in the sample.

Properties of the Arithmetic Mean

The arithmetic mean can be thought of as the center of gravity of an object. Exhibit 36 from the curriculum illustrates this concept by the above observations on a bar. When the bar is placed on a fulcrum and the fulcrum is located at the arithmetic mean, the bar balances. At any other point the bar will not balance.

A drawback of the arithmetic mean is that it is sensitive to extreme values (outliers). It can be pulled sharply upward or downward by extremely large or small observations, respectively.

When data contains outliers, there are three options to deal with the extreme values:

Option 1: Do nothing; use the data without any adjustment.

Option 2: Delete all the outliers.

Option 3: Replace the outliers with another value.

Option 1 is appropriate in cases when the extreme values are genuine.

The median is the midpoint of a data set that has been sorted into ascending or descending order.

As compared to a mean, a median is less affected by extreme values (outliers).

The mode is the most frequently occurring value in a distribution.

When working with continuous data such as stock returns, ‘modal interval’ is often used instead of a mode. The data is divided into bins and the bin with the highest frequency is considered the modal interval. Exhibit 39 from the curriculum demonstrates this concept by plotting a histogram of the daily returns on an index. The highest bar in the histogram ‘0.0 to 0.9%’ is the modal interval. 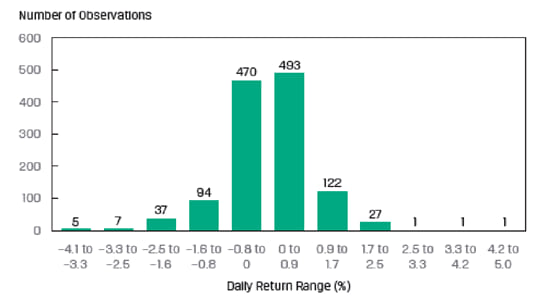 7.4 Other Concepts of Mean

In a weighted mean, instead of each data point contributing equally to the final mean, some data points contribute more “weight” than others. The formula for the weighted mean is:

where: the sum of the weights equals 1; that is

A portfolio manager wishes to compute the weighted mean of a portfolio that has the following asset allocation:

An arithmetic mean is a special case of a weighted mean where all observations are equally weighted by the factor 1/n.

Given the returns shown above, $1 invested at the start of period 1 grew to:

Other applications of the geometric mean involve the use of a second formula:

The geometric mean is appropriate to measure past performance over multiple periods.

The arithmetic mean is appropriate for forecasting single period returns.

Two possible returns for the next year are 100% and -50%. What is the expected return?

An investor purchases $1,000 of a security each month for three months. The share prices are $10, $15 and $20 at the three purchase dates. Calculate the average purchase price per share for the security purchased.

The harmonic mean is:

A more intuitive way of solving this is total money spent purchasing the shares divided by the total number of shares purchased.

Comparison of AM, GM and HM

Which mean to use?