One of the decisions we need to make in hypothesis testing is deciding which test statistic and which corresponding probability distribution to use. We use the following table to make this decision:

If the population variance is known and our sample size is large, we can use the z-statistic and z-distribution to compute the critical value.

However, if we do not know the population variance and we have a small sample size, then we have to use the t-statistic and t-distribution to compute the critical values.

An analyst believes that the average return on all Asian stocks was less than 2%. The sample size is 36 observations with a sample mean of -3. The standard deviation of the population is 4. Will he reject the null hypothesis at the 5% level of significance?

In this case, our null and alternative hypotheses are:

The standard error of the sample is:

The test statistic is:

The critical values corresponding to a 5% level of significance is -1.65.

The null and alternative hypotheses for this example will be:

Using this formula, we see that the value of the test statistic is 0.36.

In this section, we will learn how to calculate the difference between the means of two independent and normally distributed populations. We perform this test by drawing a sample from each group. If it is reasonable to believe that the samples are normally distributed and also independent of each other, we can proceed with the test. We may also assume that the population variances are equal or unequal. However, the curriculum focuses on tests under the assumption that the population variances are equal.

The test statistic is calculated as:

The term sp2 is known as the pooled estimator of the common variance. It is calculated by the following formula:

(This is based on Example 9 from the curriculum.)

An analyst wants to test if the returns for an index are different for two different time periods. He gathers the following data:

Note that these periods are of different lengths and the samples are independent; that is, there is no pairing of the days for the two periods.

Test whether there is a difference between the mean daily returns in Period 1 and in Period 2 using a 5% level of significance.

The first step is to formulate the null and alternative hypotheses. Since we want to test whether the two means were equal or different, we define the hypotheses as:

We then calculate the test statistic:

We conclude that there is insufficient evidence to indicate that the returns are different for the two time periods.

In the previous section, in order to perform hypothesis tests on differences between means of two populations, we assumed that the samples were independent. What if the samples are not independent? For example, suppose you want to conduct tests on the mean monthly return on Toyota stock and mean monthly return on Honda stock. These two samples are believed to be dependent, as they are impacted by the same economic factors.

We will now discuss the process for conducting such a t-test.

Suppose that we gather data regarding the mean monthly returns on stocks of Toyota and Honda for the last 20 months, as shown in the table below:

Here is a simplified process for conducting the hypothesis test:

We believe that the mean difference is not 0. Hence the null and alternate hypotheses are:

For the data given, the sample mean difference is 0.075%.

Use this formula to calculate the standard error of the mean difference:

We now have the required data to calculate the test statistic using a t-test. This is calculated using the following formula using n – 1 degrees of freedom:

For our data, the test statistic is

Step 3: Determine the critical value based on the level of significance

Step 4: Compare the test statistic with the critical value and make a decision

In our case, the test statistic (2.23) is greater than the critical value (2.093). Hence we will reject the null hypothesis.

Conclusion: The data seems to indicate that the mean difference is not 0.

12.1 Tests of a Single Variance

In tests concerning the variance of a single normally distributed population, we use the chi-square test statistic, denoted by χ2.

Properties of the chi-square distribution 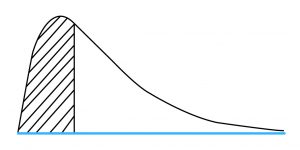 After drawing a random sample from a normally distributed population, we calculate the test statistic using the following formula using n – 1 degrees of freedom:

Note that the standard deviation is 6%. Since we are dealing with population variance, we will square this number to arrive at a variance of 36%.

We then calculate the value of the chi-square test statistic:

In order to test the equality or inequality of two variances, we use an F-test which is the ratio of sample variances.

The assumptions for a F-test to be valid are:

Properties of the F-distribution 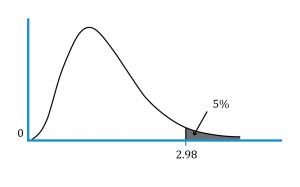 As shown in the graph, the rejection region is always in the right side tail of the distribution.

When working with F-tests, there are three hypotheses that can be formulated:

The formula for the test statistic of the F-test is:

= the sample variance of the first population with n observations

= the sample variance of the second population with n observations

The test statistic is then compared with the critical values found using the two degrees of freedom and the F-tables.

Finally, a decision is made whether to reject or not to reject the null hypothesis.

You are investigating whether the population variance of the Indian equity market changed after the deregulation of 1991. You collect 120 months of data before and after deregulation.

df = 119 for the numerator and denominator

Since the F-stat is less than the critical value, do not reject the null hypothesis.

The hypothesis-testing procedures we have discussed so far have two characteristics in common:

Any procedure which has either of the two characteristics is known as a parametric test.

Nonparametric tests are not concerned with a parameter and/or make few assumptions about the population from which the sample are drawn. We use nonparametric procedures in three situations:

There are two hypotheses that can be formulated (ρ represents the population correlation coefficient):

This test is used when we believe the population correlation is not equal to 0, or it is different from the hypothesized correlation. It is a two-tailed test.

14.1 Parametric Test of a Correlation

As long as the two variables are distributed normally, we can use sample correlation, r for our hypothesis testing. The formula for the t-test is

The magnitude of r needed to reject the null hypothesis H0: ρ= 0 decreases as sample size n increases due to the following:

In other words, as n increases, the probability of Type-II error decreases, all else equal.

The sample correlation between the oil prices and monthly returns of energy stocks in a Country A is 0.7986 for the period from January 2014 through December 2018. Can we reject a null hypothesis that the underlying or population correlation equals 0 at the 0.05 level of significance?

0 –> correlation in the population is different from 0.

A chi-square distributed test statistic is used to test for independence of two categorical variables. This nonparametric test compares actual frequencies with those expected on the basis of independence.

The test statistic is calculated as: