Let’s understand this concept with a simple example.

What is the future value (FV) after one year?

What is the future value (FV) after two years?

The future value of a single cash flow can be computed using the following formula:

FVN = future value of the investment

PV = present value of the investment

Cyndia Rojers deposits $5 million in her savings account. The account holders are entitled to a 5% interest. If Cyndia withdraws cash after 2.5 years, how much cash would she most likely be able to withdraw?

You will often use the following keys on your TI BA II Plus calculator:

One important point to note is the signs used for PV and FV. If the value for PV is negative “-”, then the value for FV is positive “+”. An inflow is often represented as a positive number, while outflows are denoted by negative numbers.

Before you begin, set the number of decimal points on your calculator to 9 to increase accuracy.

Question: You invest $100 today at 10% compounded annually. How much will you have in 5 years?

The key strokes to compute the future value of a single cash flow are illustrated below.

When our compounding frequency is not annual, we use the following formula to compute future value:

m = the number of compounding periods per year

N = the number of years

You invest $80,000 in a 3-year certificate of deposit. This CD offers a stated annual interest rate of 10% compounded quarterly. How much will you have at the end of three years?

There are two methods to solve this question.

The stated annual rate is 10%.

The number of compounding periods per year is 4. The total number of periods is 4 x 3 = 12.

You can also solve this problem using a financial calculator; the key strokes are given below:

PMT is 0 because there are no intermediate payments in this example.

Donald invested $3 million in an American bank that promises to pay 4% compounded daily. Which of the following is closest to the amount Donald receives at the end of the first year? Assume 365 days in a year.

Solution
The correct answer is B.

The formula for computing future values with continuous compounding is:

N = the number of years

Let’s look at an example.

An investment worth $50,000 earns interest that is compounded continuously. The stated annual interest is 3.6%. What is the future value of the investment after 3 years?

Assume that the stated annual interest rate is 12%. What is the future value of $100 at different compounding frequencies? What is the return?

Which offer is better?

Even though A’s 12.5% looks better, B’s 12% compounded daily will effectively give you a return of 12.75%. Therefore the offer from bank B is better.

If we are given a compounding frequency, we can compute effective rates using the following formulae:

m = number of compounding periods in one year

For example, for a stated annual rate of 12% and quarterly compounding, the EAR will be equal to:

A lot of people get confused about the -1 at the end of the formula. The idea is actually fairly straight forward. Basically we have 1.034 which is telling us how much $1 will become at the end of 4 periods. $1 is going to become $1.1255. But this is not a rate. To figure out the rate we have to subtract the original $1 that we invested. So we are left with 0.1255 which is our effective rate.

For example, for a stated annual rate of 12% and continuous compounding, the EAR will be equal to:

The different types of cash flows based on the time periods over which they occur include:

We can take each individual cash flow and see how much each of these will be worth at the end of five years. Then we can add all the values to compute the total FV of the annuity. 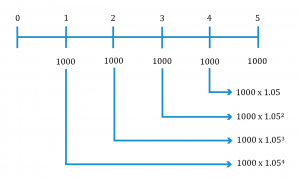 The future value of an annuity can also be computed using the following formula:

The term in square brackets is known as the ‘future value annuity factor’ (FVAF). This factor gives the future value of an ordinary annuity of $1 per period. Hence the formula given above can also be written as: FV = A x FVAF.

Given below are the keystrokes for computing the future value of an ordinary annuity.

On the exam you should use the calculator method, because this is the fastest method and does not require you to memorize the annuity formula.

Haley deposits $24,000 in her bank account at the end of every year. The account earns 12% per annum. If she continues this practice, how much money will she have at the end of 15 years? 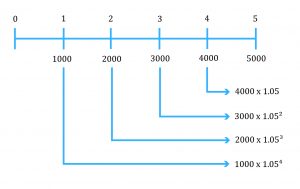