4. Point Estimates of the Population Mean

Statistical inference consists of two branches: 1) hypothesis testing and 2) estimation. Hypothesis testing addresses the question ‘Is the value of this parameter equal to some specific value?’ This is discussed in detail in the next reading. In this section, we will discuss estimation. Estimation seeks to answer the question ‘What is this parameter’s value?’ In estimation, we make the best use of the information in a sample to form one of several types of estimates of the parameter’s value.

A point estimate is a single number that estimates the unknown population parameter.

Interval estimates (or confidence intervals) are a range of values that bracket the unknown population parameter with some specified level of probability.

The formulas that we use to compute the sample mean and all other sample statistics are examples of estimation formulas or estimators. The particular value that we calculate from sample observations using an estimator is called an estimate. For example, the calculated value of the sample mean in a given sample is called a point estimate of the population mean.

The three desirable properties of an estimator are:

5. Confidence Intervals for the Population Mean and Selection of Sample Size

The quantity ‘reliability factor x standard error’ is also referred to as the precision of the estimator. Larger values indicate lower precision and vice versa.

To calculate a confidence interval for a population mean, refer to the table below and select t statistic or z statistic as per the scenario.

Use the following formulae to calculate the confidence interval:

Sampling from a normal distribution with known variance

The most basic confidence interval for the population mean arises when we are sampling from a normal distribution with known variance.

The confidence interval will be calculated as: 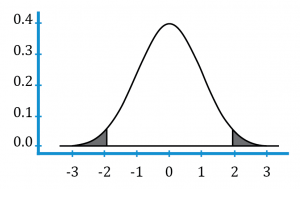 The reliability factors that are most frequently used when we construct confidence intervals based on the standard normal distribution are:

Memorize these confidence intervals and the corresponding reliability factors.

Sampling from a normal distribution with unknown variance

If the distribution of the population is normal with unknown variance, we can use the t-distribution to construct a confidence interval.

The confidence interval can be calculated using the following formula:

Given a sample size of 20, what is the reliability factor for a 90% confidence level?

In order to answer this question, we need to refer to the t-table. A snapshot of the table is given below. This table shows the level of significance for one-tailed probabilities.

An analyst wants to estimate the return on the Hang Seng Index for the current year using the following data and assumptions:

All else being equal, when the sample size (n) is increased, the standard error (s/ ) decreases and we have a more precise (narrower) confidence interval. Based on this discussion it might appear that we should use as large a sample size as possible. However, we must consider the following issues:

Resampling is a computational tool in which we repeatedly draw samples from the original observed data sample for the statistical inference of population parameters. Two popular resampling methods are:

The bootstrap technique is illustrated in the figure below: 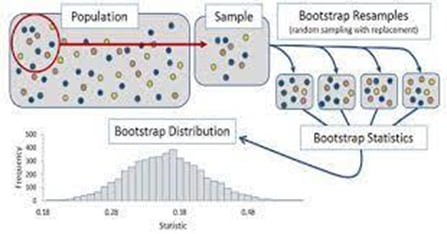 Under this technique, samples are constructed by drawing observations from the large sample (of size n) one at a time and returning them to the data sample after they have been chosen. This allows a given observation to be included in a given small sample more than once. This sampling approach is called sampling with replacement.

Bootstrap is a simple but powerful technique that is particularly useful when no analytical formula is available to estimate the distribution of estimators.

In the Jackknife technique we start with the original observed data sample. Subsequent samples are then created by leaving out one observation at a time from the set (and not replacing it). Thus, for a sample of size n, jackknife usually requires n repetitions. The Jackknife method is frequently used to reduce the bias of an estimator.

Note that bootstrap differs from jackknife in two ways:

There are many issues in sampling. Here we discuss four main issues.

Data-snooping is the practice of analyzing the same data again and again, till a pattern that works is identified.

There are two signs that can warn analysts about the potential existence of data snooping:

The best way to avoid this bias is to test the pattern on out-of-sample data to check if it holds.

When data availability leads to certain assets being excluded from the analysis, the resulting problem is known as sample selection bias.

One way to avoid this bias is to use point-in-time (PIT) data. PIT data is stamped with the date when it was released. In the above example, PIT data of P/B would be stamped with the company’s filing or press release date rather than the fiscal quarter end date.