If the probability of an event is affected by the occurrence of another event then it is called a dependent event.

According to the total probability rule, the probability of any event P(A) can be expressed as:

Using the multiplication rule we get,

If we have more than two scenarios, we can generalize this equation to:

Expected Value of a Random Variable

Xi = One of n possible outcomes of the random variable X

Variance of a Random Variable

The expected value is our forecast, but we cannot count on the individual forecast being realized. This is why we need to measure the risk we face. Variance and standard deviation are examples of how we can measure this risk. The variance of a random variable is the probability-weighted sum of the squared differences between each possible outcome and the expected value of the random variable. It is expressed as:

Variance is a number greater than or equal to 0 because it is the sum of squared terms. If variance is 0, there is no dispersion or risk. The outcome is certain and the quantity X is not random at all. Standard deviation is the positive square root of variance.

We can calculate the expected value and variance of a random variable using a financial calculator as shown below:

A project’s cash flow for the upcoming year depends on the state of the economy, as shown in the table below.  What is the variance of the cash flow? What is the standard deviation?

Notice that this formula is exactly similar to the total probability rule formula.

We can plot the probabilities using a tree diagram. 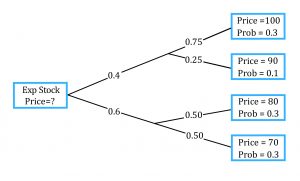 Now we use the total probability rule for expected value of stock price at the end of the current period: