4. Specify the Level of Significance

In reaching a statistical decision, we can make two possible errors:

The following table shows the possible outcomes of a test.

The different probabilities associated with the hypothesis testing decisions are presented in the table below:

Continuing with our Asian stocks example, suppose we want to test if the population mean is greater than 2%. Say we want to test our hypothesis at the 5% significance level. This is a one-tailed test and we are only interested in the right tail of the distribution. (If we were trying to assess whether the population mean is less than 2%, we would be interested in the left tail.) 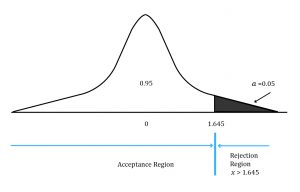 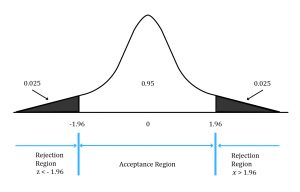 5.3 Collect the Data and Calculate the Test Statistic

In this step we first ensure that the sampling procedure does not include biases, such as sample selection or time bias. Then, we cleanse the data by removing inaccuracies and other measurement errors in the data. Once we are convinced that the sample data is unbiased and accurate, we use it to calculate the appropriate test statistic.

A statistical decision simply consists of rejecting or not rejecting the null hypothesis.

An economic decision takes into consideration all economic issues relevant to the decision, such as transaction costs, risk tolerance, and the impact on the existing portfolio. Sometimes a test may indicate a result that is statistically significant, but it may not be economically significant.

The p-value is the smallest level of significance at which the null hypothesis can be rejected. It can be used in the hypothesis testing framework as an alternative to using rejection points.

Relationship between test-statistic and p-value

To overcome this issue, the false discovery approach is used to adjust the p-values when you run multiple tests. The researcher first ranks the p-values from the various tests from lowest to highest. He then makes the following comparison, starting with the lowest p-value (with k = 1), p(1):

This comparison is repeated until we find the highest ranked p(k) for which this condition holds. For example, say we perform this check for k=1, k=2, k=3, and k=4; and we find that the condition holds true for k=4. Then we can say that the first four tests ranked on the basis of the lowest p-values are significant.