Aggregate demand is the quantity of goods and services demanded by consumers (includes households, businesses, government, etc.) at any given price level. The aggregate demand curve (AD) represents the combinations of aggregate income and the price level at which the following two conditions must be satisfied:

We will cover IS and LM curves later. The graph below shows an AD curve. 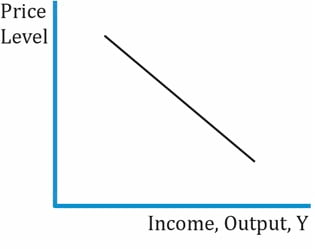 What the graph plots:

The demand curve in microeconomics and the AD curve here are both negatively sloped. But there are some major differences as listed below:

The condition that is the basis for the IS curve is:

Simply put, aggregate income is the sum of consumption, saving, and taxes. Think of it as how your income gets spent.

Equating the two, we get:

Given that the aggregate expenditure must equal aggregate output, how can we express a government’s fiscal deficit in terms of private saving, investment, and net exports?

Because of a decline in housing costs, savings are up. Assume investment and the fiscal deficit are unchanged. What is the impact on net exports and capital outflows?

It is given that I and (G-T) are unchanged. If savings are up, then net exports must also increase.

When net exports increase, then it also leads to the economy investing in foreign assets or lending money to foreigners. So, when savings go up, capital outflows also increase.

Balancing Aggregate Income and Expenditure: the IS Curve

The graph below shows an IS curve.

Now, we will individually look at the relationship between each of these components and interest rates.

Relationship between investment spending and interest rates and aggregate income:

The graph below shows an IS curve. 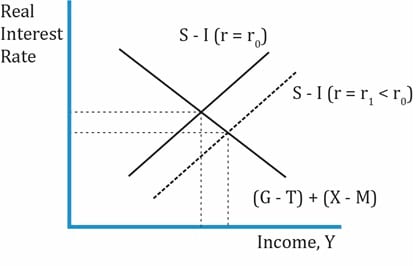 What happens when the interest rate decreases from 5% to, let us say, 4%?

The IS curve is called so because it is derived from investment and savings. Equilibrium points such as A and B corresponding to different interest rates (5% and 4%, respectively here) help us come up with the IS curve. The corresponding incomes are 100 and 110. Now that you have understood the individual relationships, you can see why the IS curve is downward sloping.

The key points related to the IS curve are summarized below:

The IS curve does not tell us the appropriate level of interest rate or the connection between output/income and price level. For this we need the LM curve.