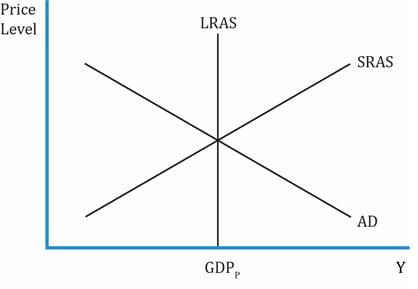 In contrast, if the real GDP increases by 4%, then it means the AD has increased, and the AD curve shifts up to the right. The corresponding GDP now is GDPreal. The equilibrium point has gone up in the short-term and it is likely it will come back to a point on the LRAS. As an investor, we will be happy if the LRAS moves to the right as it means an increase in productive capacity.

4.1. The Production Function and Potential GDP

The Solow growth model is the starting point for analyzing the drivers of long-term growth in any economy. With this model, one can analyze why the growth in one country differs from another. This model is relevant in determining the factors that cause the LRAS curve to shift permanently to the right (increase in productive capacity of an economy).

According to the neo-classical model (also called the Solow growth model), productive capacity (potential GDP) increases for the following reasons:

The Solow model builds on the Cobb-Douglas production function, which we have seen earlier in microeconomics, and adds capital accumulation to it. It is based on the assumption that capital accumulation in the long run fuels economic growth. The Solow model is based on a production function such as: Y = A * F (L, K) which means the output is a function of labor and capital, and total factor productivity.

Recall that the production function is based on two assumptions:

Increase in labor supply leads to an increase in economic growth. Labor force is the number of people available for work from the working age population. This includes unemployed people who are looking for work.

This is the quality of the workforce i.e. the skill and knowledge of the workers. Investment in education and on-the-job training improves human capital, which in turn causes the production function to shift upward, and improves productivity/standard of living/economic growth. The spillover effect is the effect of this investment in human capital on the people around.

This refers to buildings, machinery, and equipment. If net investment is positive, then physical capital is growing. Countries with a higher rate of net investment have a higher GDP growth. Ex: China, India, and South Korea.

Spending on R&D leads to discoveries or technological improvements that make it possible to increase a firm’s output with the same inputs. Ex: growth in IT; semiconductor industries. This is one factor that allows an economy to grow because other inputs (capital, labor) face diminishing marginal returns. The faster the growth in technological change, the greater the growth in productivity and GDP. TFP represents the amount by which an output increases due to improvements in the production process.

Technology is the main factor that affects economic growth in developed countries.

Natural Resources: comprises renewable (can be replenished, such as trees and water) and non-renewable resources (coal and oil). Higher natural resources lead to higher growth.

Other factors driving growth: Other factors such as R&D and public education also produce positive externalities that can boost economic growth.

However, some factors such as pollution can produce negative externalities and limit economic growth. For example, carbon dioxide emissions usually rise with economic growth, the resultant climate change impose a cost on the global economy in terms of economic activity, food production, health and habitability.

Improvements in a country’s legal and political environment can also improve economic growth.

Potential GDP can be expressed as:

Converting the above equation in terms of growth rates we get:

IFT BLACK FRIDAY SALE is Now Live! Get up to 25% off! Sale ends 28-Nov
Code: BF-22-25
This is default text for notification bar
Learn more