As compared to households and corporations, the economic decisions made by governments can have an enormous impact on economies because governments are usually the largest employers, largest spenders and largest borrowers in an economy.

Monetary policy: Refers to central bank activities directed towards influencing the level of interest rates and money supply in the economy.

Fiscal policy: Refers to government decisions about taxation and spending.

The overall goal of these policies is to create an economic environment of stable growth and low inflation.

As stated above, monetary policy refers to central bank activities directed towards influencing the level of interest rates and money supply in the economy.

Money is generally defined as a medium of exchange. Instead of using the barter system to exchange goods and services, money facilitates an indirect exchange and helps overcome the drawbacks of a barter system.

2.1 The Functions of Money

For money to be a medium of exchange, it must:

Let us take the exhibit below (reproduced from the curriculum) to illustrate how fractional reserve banking results in money creation:

Now let us go over the example. Assume the reserve requirement is 10%, that is, banks are required to retain only 10% of the total deposits as balances with them. The rest can be lent out.

First Bank of Nations: If a customer makes a deposit of €100, then the bank must retain €10 and the remaining €90 can be loaned out to another customer.

This process continues until there is no more money to be deposited and loaned out. How much total money is created from an initial deposit of €100 in this process?, If you ask the first customer how much money he has, he will say €100, while the second customer will say €90, the third €72.9 and so on. It is the sum of all the deposits in the banking system. It can be calculated using this formula:

The money created in our example is

Given a reserve requirement of 8 per cent, how much money can be created by depositing an additional $500?

The expression used to calculate the amount of money created is

Narrow money: Notes and coins in circulation plus other very highly liquid deposits.

Because financial systems, practice and institutions vary from economy to economy, so do the definitions of money.

The Quantity Theory of Money

We looked at this concept in a previous reading. Quantity theory of money states that total spending (in money terms) is proportional to the quantity of money.

V = velocity of circulation of money

If velocity is assumed to be constant as per quantity theory, then spending (P x Y) is proportional to the quantity of money (M).

3.1 The Demand for Money

The amount of wealth that the citizens of an economy choose to hold in the form of money rather than in bonds or equities is known as the demand for money.

3.2 The Supply and Demand for Money

As with other markets, the price of money is determined by the interaction of demand and supply. 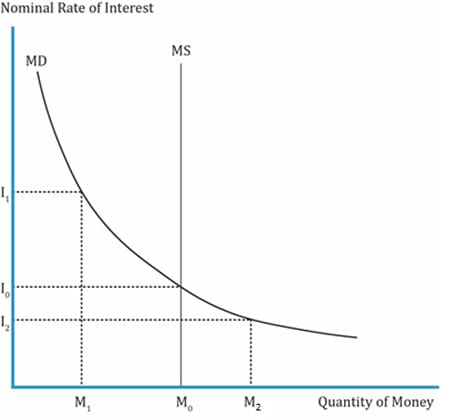 πe = expected rate of inflation over any given time horizon

Fischer effect states that the real rate of interest in an economy is relatively stable and changes in nominal interest rates are due to changes in expected inflation. This is directly related to the concept of money neutrality.

But, investors can never be sure of how much inflation or real growth would be in the future. They, therefore require an additional return for bearing this risk, which is called the risk premium.

When we consider uncertainty, nominal interest rates have three components:

For example: Let us assume an investor invests in a corporate bond that offers a yield of 15% over the next year. It can be broken down into three components: real return of 4%, expected inflation of 8% and risk premium of 3%. (You will learn in ‘fixed income’ section that we can further divide this risk premium into credit risk premium, liquidity risk premium and so on.)