Economics is a discipline that deals with factors affecting the production, distribution, and consumption of goods and services. It is divided into two broad areas: microeconomics and macroeconomics.

Macroeconomics deals with the production and consumption of the overall economy. It focuses on aggregate economic quantities such as gross domestic product, gross national income, and national output.

Microeconomics deals with demand and supply of goods and services at a micro level, such as individual consumers and businesses. According to microeconomics, private economic units can be divided into two groups of study:

This reading focuses on microeconomics and covers the demand and supply side of the market.

Demand is the willingness and ability of consumers to purchase a given amount of good or service at a given price. The law of demand states that as the price of a good rises, consumers will want to buy less of it. Similarly, as price falls, the quantity demanded increases. Apart from the good’s own price, other factors that impact consumer demand include prices of other substitute and complement goods, customers’ incomes, and individual tastes and preferences.

The general form of a demand function is shown below:

QD = quantity demanded of some good.

PA = price per unit of a related good A.

PB = price per unit of a related good B.

Now, let us assume that the consumers’ income and the price of the table are fixed at a particular point in time. If the values of I and PT are 1633.33 and 800.00 respectively, then the quantity demanded can be rewritten as:

A demand curve is a graphical representation of the inverse demand function. The demand curve plots the price on the y-axis and the quantity on the x-axis.  It shows the quantity of a good that consumers are willing to buy at any given price, all else equal. 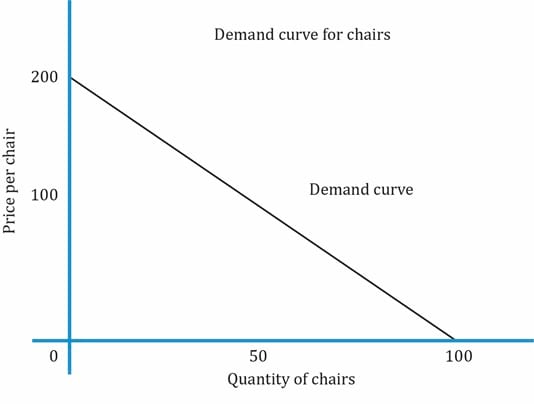 3.     Own Price Elasticity of Demand

Before we go further, let us refresh a basic mathematical principle. Consider a simple equation:

Going back to our demand function, QD = 100 – 0.5P. Based on the mathematical principle we just discussed,

For all linear demand curves, elasticity varies depending on where it is calculated. Let us go back to the own-price elasticity of demand for chairs to see which parts of the demand curve are inelastic, elastic and unit elastic.

These scenarios are shown in the figure below: 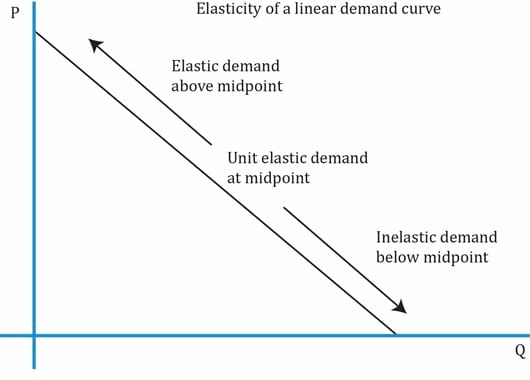 There are two special cases of linear demand curves in which the elasticity is the same at all points – perfectly elastic and perfectly inelastic – though it is difficult to find real life examples. Demand is perfectly inelastic (represented by a vertical demand curve) when the quantity demanded is the same over a price range. Demand is perfectly elastic for a given price (represented by a horizontal demand curve) when a change in price will cause the quantity demanded to reduce to zero.

Example: Gourmet food items. A change in price has no change in quantity demanded.

Example: generic food such as bread. 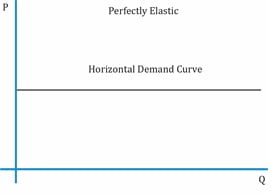 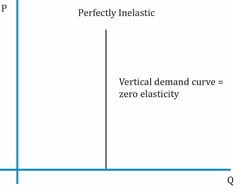 The factors that help in determining whether the demand for a product is highly elastic are as follows:

Total expenditure is the total amount consumers spend on a product. It is the price multiplied by the quantity.

Elastic demand: When demand is elastic, a 1% decrease in price causes a quantity demanded to increase by more than 1%. As a result, total expenditure increases.

Inelastic demand: When demand is inelastic, a 1% decrease in price causes quantity demanded to increase by less than 1%. As a result, total expenditure decreases.

Unit elastic: Total expenditure does not change at the point where demand is unit elastic.

The relationship between change in price and total expenditure is summarized in the table below: