OR
- OR -
Proceed to IFT Learning Portal

The focus of our previous reading was GDP, the goods and services produced in an economy, and the factors that affect it in the long run. In this reading, we look at the factors causing short-term movements in the economy, such as money, inflation, population, technology, and capital.

This reading is organized into the following sections:

2.  Overview of the Business Cycle

The curriculum defines business cycle as: “Business cycles are a type of fluctuation found in the aggregate economic activity of nations that organize their work mainly in business enterprises: a cycle consists of expansions occurring at about the same time in many economic activities, followed by similarly general recessions, contractions, and revivals which merge into the expansion phase of the next cycle; this sequence of events is recurrent but not periodic; in duration, business cycles vary from more than one year to 10 or 12 years.”

Some important points to be noted from the definition:

2.1. Phases of the Business Cycle

There are four stages of a business cycle:

The four stages are illustrated below (this exhibit is reproduced from the curriculum): 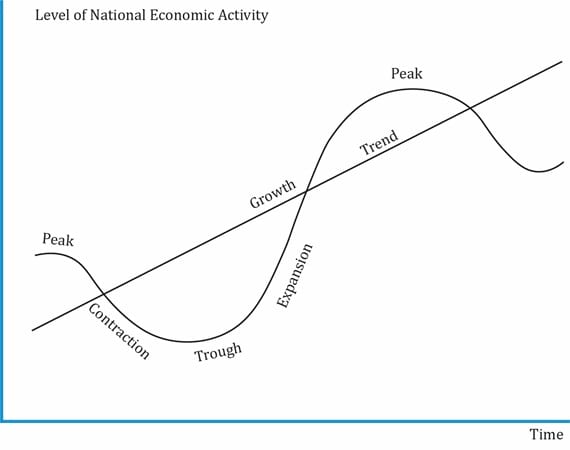 This connection between aggregate demand and phases of a business cycle is not explicitly given in the curriculum. But, let us tie the concepts we covered in the previous reading to this one:

Some of the important characteristics of each phase in a business cycle are presented in the exhibit (reproduced from the curriculum):

Cutbacks appear most in industrial production, housing, consumer durable items, and orders for new business equipment, followed, with a lag, by cutbacks in other forms of capital spending. Inflation Inflation remains moderate and may continue to fall. Inflation picks up modestly. Inflation further accelerates. Inflation decelerates but with a lag.

At what stage of the business cycle is labor productivity likely to be the highest?

. This ratio is likely to the highest at the trough. At the trough, labor is low. Output though low is not as low compared to labor, making the ratio comparatively higher at this point.

2.2. Resource Use through the Business Cycle

Fluctuations in the following variables are linked to economic fluctuations: 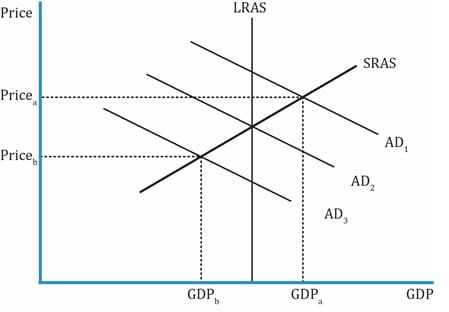 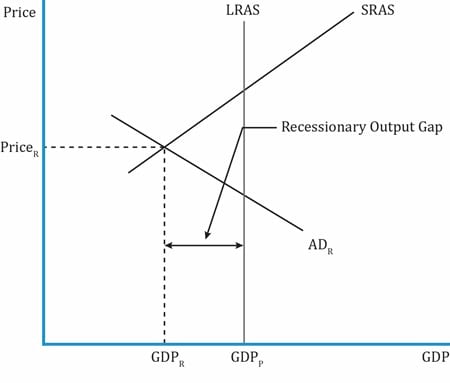 A major indicator of capital spending is the orders for capital equipment. This excludes orders from the defense sector and military aircraft because these orders are infrequent and large, and cannot be treated as regular business cycle indicators.

Increase and decrease in inventory happens very rapidly, and has a major effect on economic growth despite the small size.

(I/S) ratio is an important indicator. Final sales numbers better reveal the reality of the economic situation than inventory numbers because the inventory may accumulate or companies may want to dispose obsolete inventory before starting production; it depends on the stage of the business cycle.

The different stages are tabulated below:

Inventories tend to rise when the I/S ratio is low. During recovery, inventory will be less than sales and companies start production to increase inventory.

Major points related to consumer behavior are shown below:

This sector varies in size and importance from one country to another. It is significant for countries like Japan, where most of domestic produce is exported, but is a small amount for U.S. Major points related to the external trade sector are listed below: