This is a market structure in which a single company makes up the entire market. It is on the opposite end of the spectrum as compared to perfect competition.

Ex: Government created monopolies such as electricity or water supply in a major city.

How monopolies are created:

A natural monopoly is one where cost decreases with quantity. The firm is able to meet most of the quantity demanded at a low cost, making it difficult for new firms to enter the market.

Let us say the quantity demanded is given by: 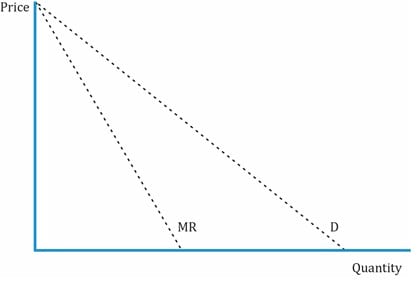 The graph below shows the demand, MR, AC, and MC curves for a monopoly firm. 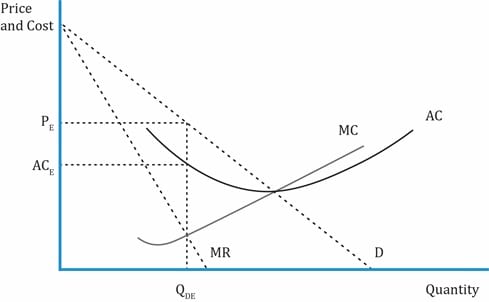 Profit is based on the demand curve = TR – TC. Let’s say TC is given by:

From TC, we can derive MC =

Given the total cost function, you can derive the MC curve as shown above. Supply and demand can be equated to determine the profit-maximizing output.

In the previous section, we calculated the optimal output by equating MR = MC.

Another way of determining the profit-maximizing output is to equate

= 0. At this point there is no change in profit when output changes.

The price at the profit-maximizing output level of 75 is:

Relationship between MR and price elasticity is: MR = P [1-

If MC = 75 and the own price elasticity of demand = 1.5, what is the profit-maximizing price?

A natural monopoly is a market where the average cost of production falls over the relevant range of consumer demand. There are three possible cases for output and pricing: 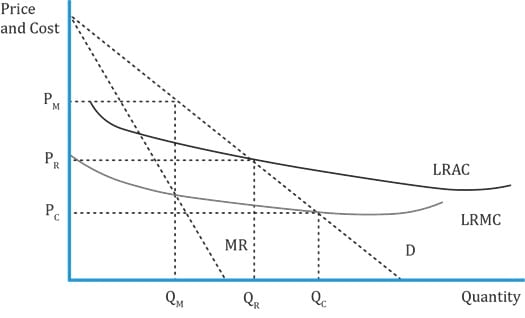 What a monopolist charges for their product and how much quantity is supplied lie on two extremes: on one end the price and quantity supplied may be equal to that of perfect competition where there is a uniform price, and on the other end is discriminating consumers on some grounds, which leads to different prices for the same product.

Ex: In restaurants, lunch is cheaper than dinner, or weekday prices are different than Friday-Sunday prices.

My monthly demand for visits to the local gym is given by: Q = 25 – 5P where Q is the number of visits per month and P is the price per visit. The gym’s marginal cost is 1 per visit.

I would make 20 visits per month.

Monopolists have considerable pricing power and may charge consumers in different ways. Exporters charging higher prices for denim jeans in the international market compared to local markets is an example of:

For regulated monopolies, there are several possible solutions in the long run: