LM02 The Firm and Market Structures

Factors of production are the inputs used by a firm to produce goods and services. These inputs include land, labor, capital, and raw materials. For simplicity, we will consider only two inputs:

Before moving on, let us understand a few basic terms.

w is the wage rate per hour

L is the number of labor hours

r is the cost per hour of capital and

K is number of hours for which capital is used.

Two factors that lower the cost of producing at a given level of output are:

Average product is the total product divided by the quantity of a given input.  It measures the productivity of an input. The average product of labor is given by:

Let us take an example of three companies X, Y and Z whose total product and average product of labor are given below:

The table below shows TP, AP and MP of labor for a firm across different levels of labor:

In this reading, ‘cost’ refers to economic cost and ‘profit’ refers to ‘economic profit’.

If a firm’s revenue is equal to the firm’s total economic cost, the economic profit is zero and the firm is said to be earning a normal profit.

In a perfectly competitive market:

In an imperfect competitive market: 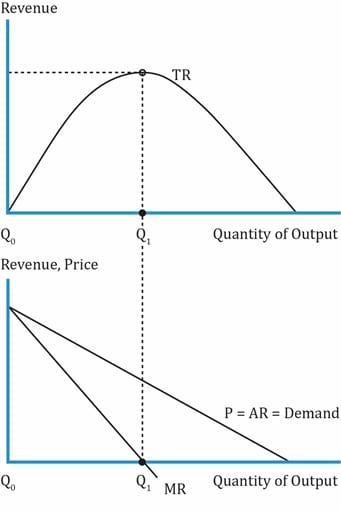 Marginal cost is the incremental cost of producing one more unit.  It can be calculated by dividing the change in total cost by the change in quantity. It is expressed as:

. Long-run marginal cost is the cost of producing one more unit assuming all factors of production are variable.

Understanding the Interaction between Total, Variable, Fixed, and Marginal Cost and Output

All the graphs we look at in this section are from a short-run perspective. In the short run, one or more factors of production are fixed. Usually capital is fixed in the short run while labor may change. The graph below shows the cost curves for a firm in the short run. 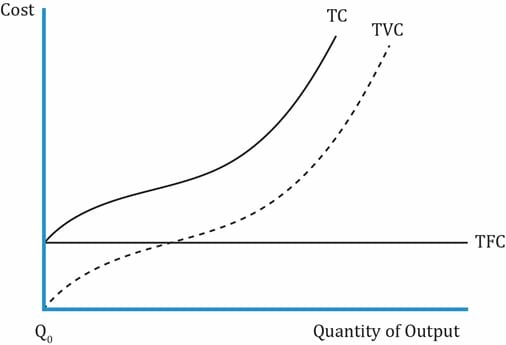 The graph below shows the MC, ATC and AVC curves for a firm in the short run. 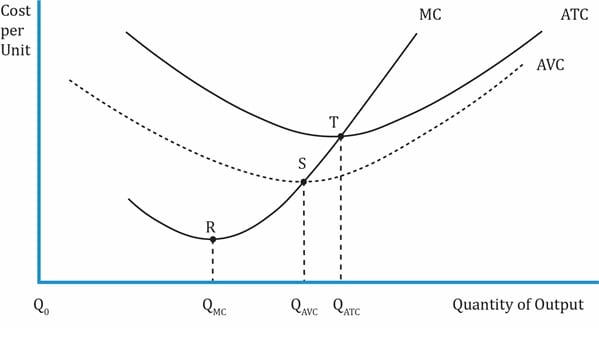 Revenue under Conditions of Perfect and Imperfect Competition

Profit is maximized when:

The graph below shows the TR, TC, demand curve, and profit maximization under perfect competition. 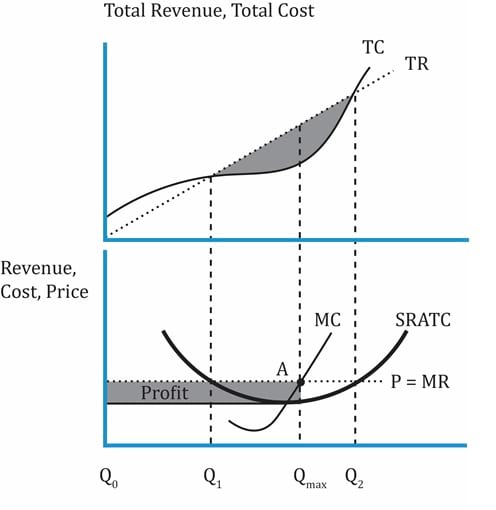 Qmax is the profit maximizing quantity where MR = MC and MC is rising.

11. Break Even Analysis and Shutdown Decision

A firm is said to breakeven under the following conditions:

When a firm is operating at its breakeven point, the economic profit is zero.  It might still be earning a positive accounting profit.

A perfectly competitive market with no barriers to entry will attract new entrants. The increased competition will lead to increased output and lower prices in the long run where no firm is able to earn an excess return or positive economic profit.

Under perfect competition, firms earn only normal profits in the long run.

The relationships that show when a firm must operate or shutdown are given in the table below:

Let us understand a firm’s breakeven and shutdown point using the graph below.

LM02 The Firm and Market Structures