An oligopoly market has few sellers of a product and many buyers. These sellers are large players in their industry who determine the prices or quantities. For example, credit card companies such as Visa, MasterCard, and Amex.

If firms collude, the total market demand is divided among the individual participants. The firms act like a cartel and decide how to divide the demand, and what price to set for the products in order to maximize profit.

If firms do not collude, each firm faces an individual demand curve and a market demand curve. There are several models that try to explain pricing in oligopoly markets:

According to this theory, a competitor will not follow a price increase, but will cut prices in response to a price decrease.

Example: Let us assume a town has two cola suppliers: Coke and Pepsi. This type of oligopoly is called a duopoly. Now, assume the initial equilibrium price of 1 liter Coke bottle is 100 and the quantity is 5000. 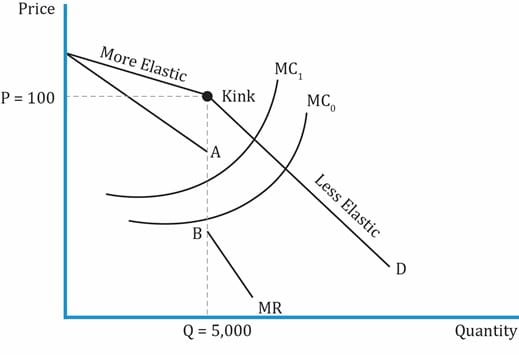 Effect of price increase: If Coke increases its price from 100 to 105, what will Pepsi do? According to the interdependence theory, Pepsi will not increase the price and consumers will switch from Coke to Pepsi. The quantity demanded of Coke will decrease (see the elastic portion of the demand curve).

Effect of price decrease: Instead, if Coke decreases the price to 95, then Pepsi will also decrease the price to 95. The quantity demanded of Coke will increase when the price decreases, but not by much because there is no substitution effect. Consumers do not switch from Pepsi to Coke as both are selling at the same price. To the right of the kink, the demand curve is inelastic.

Firms compete simultaneously to determine a profit-maximizing output, based on the assumption that the other firms’ output will not change.  In the long run, change in price or quantity will NOT increase profits. As the number of firms in an oligopoly increase, the equilibrium point moves closer to perfect competition. 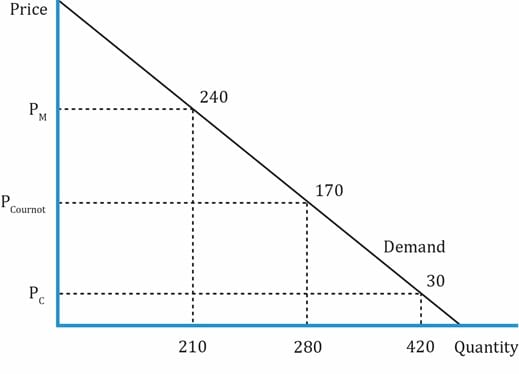 The Nash Equilibrium in a Duopoly Market

Unlike perfect competition, in oligopoly there is a lot of strategic interdependence between firms. Since the number of firms are few, the actions one takes affects the others.

Nash Equilibrium: A set of choices/strategies among two or more participants is called a Nash equilibrium if, holding the strategies of all other participants constant, no participant has an incentive to choose a different strategy. In an oligopoly, firms arrive at an equilibrium strategy after considering the actions of other firms (interdependence). Once they arrive at equilibrium, no firm wants to change its strategy.

Assumptions made in Nash equilibrium:

Example: WesCo and RifCo sell a similar product. Each company can employ a high-price strategy or a low-price strategy. The profit for each strategy is shown. What is the Nash equilibrium? 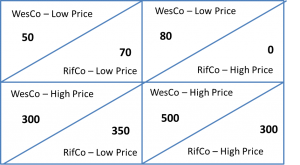 No matter where the companies start, they will end up in box 4 (lower left box).

Let’s start with box 1. The total profit of WesCo and RifCo is 120. They are both selling the products at a lower price. It is in WesCo’s best interest to increase prices, and their profits jump from 50 to 300 in box 4. It is in RifCo’s best interest as well if WesCo increases the price, as RifCo can also increase the price. RifCo’s profit jumps from 70 to 350. The combined profit of box 4 now is 650.

The combined profits are the highest in box 3, which is 800. Both the companies are charging high prices. Box 3 is in WesCo’s best interest as it earns its maximum profit of 500, but it’s possible only if RifCo also charges the high price. But RifCo is not happy here and would lower the prices to increase its profit from 300 (box 3) to 350 (box 4).

When RifCo lowers its price to make a profit of 350 in box 4, WesCo’s profit falls from 500 to 300. The Nash equilibrium position in box 4 is what they arrive at finally.

Can both companies be better if they collude? Yes, if both the companies agree to collude and charge high prices. If WesCo and RifCo agree to split the maximum profit of 800 equally, then each company makes a profit of 400, which is better than the Nash equilibrium profit of 300 and 350 profit respectively. Companies are said to form a cartel when they engage in collusive agreements openly.

Factors that affect the chances of successful collusion:

There is one dominant large firm and many small firms. The large firm sets the price and has the first mover advantage.

In the Stackelberg model, the decision-making happens sequentially (recall it happens simultaneously in the Cournot assumption). The leader firm chooses the output first and then the follower firm chooses its output.

The curriculum discusses the supply analysis for only one type of oligopoly – the dominant firm oligopoly.

Example: Say we have an oligopoly market where one firm has a significantly lower cost of production than its competitors and has a 40% market share. A dominant or leader firm is a firm with at least 40 % market share, greater capacity, lower cost structure, and is price maker. A follower firm is a small firm that is a price taker – i.e. it accepts the price set by the leader firm. Let us say there are five such firms in this market.

The graph below shows the quantity that will be supplied and the price charged by the market leader, as well as by the other firms. 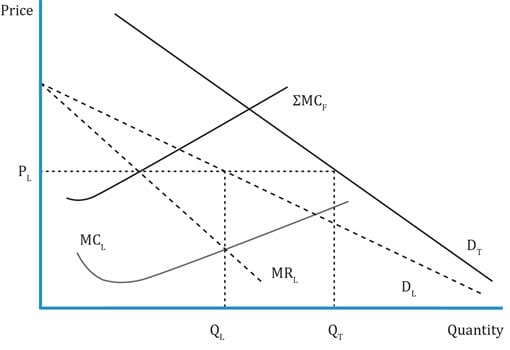 There is no single optimum price and output model that works for all oligopoly market situations because of different strategies and pricing methods. The process for determining the optimal price for a few methods is listed below:

Long-run economic profits are possible, but empirical evidence suggests that over time the market share of the dominant firm declines.